There has been high levels off discussion around the recent Federal Budget announcement which highlighted the stronger than expected economy and rapidly reducing unemployment. With the looming Federal election, a number of short term cost of living measures have been introduced to counteract the high inflation, however, there has been a vast array and increased expenditure across other sectors including infrastructure set to impact local property markets.

The $120 billion 10-year infrastructure plan sees initiatives across the country heavily aligned with transport including fast rail, roads, freight movement stimulating job security and continued economic growth. The additional $17.9 billion announced is being spread throughout urban and regional Australia with the greatest investment earmarked for Queensland, receiving $3.9 billion across projects to support the growing population.

Both Victoria and NSW are expected to receive $3.3 billion towards projects including Melbourne Intermodal Terminal to aid improvement in logistics and freight movements while NSW will benefit from a range of road and rail projects both in Greater Sydney and to support neighbouring regional cities. While all other states will enjoy projects focussed on both road and rail for the local population and to improve supply chain and commodity movement to support economic growth. 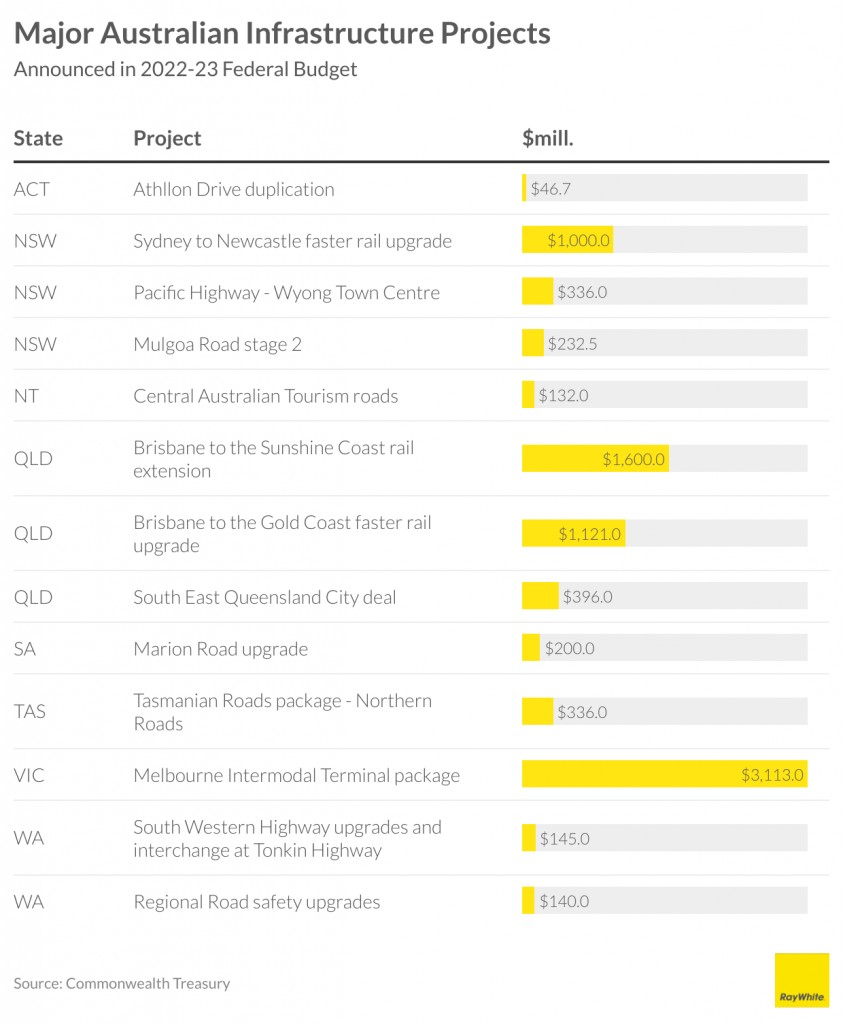 With over 20 per cent of all infrastructure spend being devoted to Queensland projects, it’s an exciting time for the Sunshine State. Key features of the Budget have included a vast improvement in rail facilities, notably the Sunshine Coast to Brisbane corridor, which is long overdue and will support the strong growth in population and employment we have seen in this region.  Also the rapid rail from Gold Coast to Brisbane, again improving connectivity across SEQ for the large commuter workforce, increased local population and tourism.

The strong increase in demand in these regions, stemming from interstate population movements, has grown over the last two year period resulting in a reduction in vacancies across all commercial asset types putting downward pressure on investment yields. This ongoing infrastructure investment in the region will further enhance its attractiveness for new and growing businesses as well as investors looking to secure assets in a future growth market.

This comes in readiness for the Brisbane 2032 Olympics and Paralympic Games which will see the world spotlight on SEQ which will benefit from both new and upgraded facilities for the state to enjoy once the Olympic flame is extinguished. The SEQ Cities plan will continue to improve the connectivity for the region by creating thriving communities and job opportunities with a focus on digital innovation and integrated transport options.

While SEQ has been a major beneficiary of the infrastructure budget, supporting regional cities is important together with improved accessibility to capital cities.  Road and rail investment has been earmarked for Townsville and Rockhampton corridors as well as projects in Mount Isa and Cairns, improving the ability to transport goods and services across the state as well as connecting with port facilities in Queensland.

The strong growth in the logistics sector in Australia over the past few years is expected to further increase resulting in a need for greater quality distribution centres, last mile warehousing and cold storage facilities along major nodes in this region.

Back to all news
Up to Date